A nonprofit group, East West Foundation, arranged for the Dalai Lama of Tibet to be the keynote speaker at a weeklong, multi-disciplinary event exploring Eastern and Western approaches to psychological well being. Prior to the event, word arrived he would likely receive the Nobel Peace Prize. Appropriate plans were made for the eventuality.

 My role with the Foundation initially was fundraising, with ad hoc management assignments. I then managed the Dalai Lama’s first press conference after he had won the Nobel. I handled his media requests for some time thereafter. I also assisted in the production and promotion of previously unplanned events, some public, some private.

Excerpts from the Dalai Lama’s 1989 press conference were broadcast for some time worldwide. The attention helped advance awareness of Tibet and Tibetans’ concerns. Being in the presence of the Dalai Lama left a lifelong impression. He possessed and displayed in poignant ways two qualities rarely found in the same person, namely power and humility. My time with the Dalai Lama ranks along with the success of the 1990 Laguna Canyon campaign and Gary Hart’s 1984 New Hampshire presidential primary victory as among my most memorable experiences. 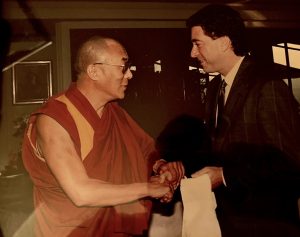